This Is Our Story & Why We Do This 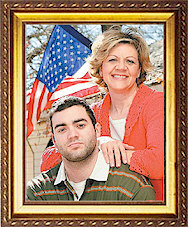 In January of 2003, my 19 year old Army Reserve son, announced to me that he volunteered for duty in Iraq and would be leaving in 24 hours. The war had not officially begun, but both 9/11 and Afghanistan were fresh on my heart and mind and so was the uncertainty of his safety and return home.

Joe left in January 2003 and was in the first wave of Operation Iraqi Freedom (OIF). He deployed to Iraq in March 2003. It wasn’t until the following February that he returned home for his first leave, was sent back to Iraq and completed his duty in April 2004.

When he got off the plane, he looked as healthy as I had ever seen him. Strong, muscular and walking with confidence as people stopped to shake his hand and thank him for his duty to our country. It “appeared” that he had weathered the storm well. I was vigilant, but relieved to think that my son was not only home and alive, but that he did not bear any of the scars of battle that I had feared.

Currently, Joe is 100% disabled with what has been labeled PTSD (Post Traumatic Stress Disorder) and major depression. He lives at home, even though he would rather be on his own. He cannot currently work, even though he would give anything to be able to do so. He isolates in his room because of his disorder. He is frustrated because in his heart he wants to be a “normal”, but his mind and body fight against him so fiercely that he is disabled.

As a Licensed Professional Counselor (LPC) in the state of Oklahoma, my fate has been to have a full understanding of mental illness from a professional level and to live “up close and personal” with it as a mother of an OIF Veteran. 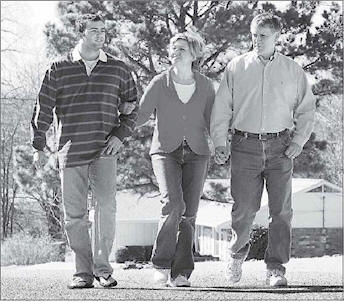 BY PAUL HELLSTERN, THE OKLAHOMAN. From left, Iraq war veteran Joe Collins walks with his mom, Oklahoma Mother of the Year Cynde Collins-Clark, and stepfather, Jim Clark, outside their Edmond home

This website is designed specifically for family and friends of American Veterans. As I searched for anything I could to find guidance, hope and comfort, I began to realize that everything seemed impersonal, complicated or minimized the severity of the problem. So, this website is my hope and effort is to share information, support, and encouragement for those who watched their soldier leave to serve our country and return as a different person.

I am finding that despite the overwhelming sorrow of the loss of the son I once knew, that there is opportunity for great healing and change for him, our family and our country.

My prayer is that you too, will feel a sense of hope through the connections and information provided in this web site.

The original story for this page was written in 2007. We want to let you know how Joe and our family are doing now. In the early Fall of 2008, Joe attended a private treatment facility for PTSD. He was gone for 30 days. He had to be escorted to the facility in Tucson, AZ. He had not been out of bed for over 3 years except for doctor appointments and rarely other times.

He called from Tucson at the end of his stay and said “he could fly home alone”. Since that time, he has worked very hard to maintain the momentum he gained in that safe and loving and healing environment at Sierra Tucson. He sees his counselor 2 times a week, makes himself leave the house daily, and has even spoken directly to other veterans/families to encourage them to seek help early if they notice problems. He gets massage therapy weekly, and has purchased a Wii program for yoga and other exercise. He has made great progress but still requires the daily support of our family for recovery. His next hope is to be able to function more in the “outside world.”

He is living testament that there is hope. He is also living testament that it takes “the courage of a warrior” to seek help AND to participate in the healing process. Our family continues to love and support every effort he makes, seeking ALSO to maintain health and balance ourselves as individuals and as a family.

Joe has continued to progress in his psychological well-being, but the many years of anxiety, seclusion, etc. have begun to reveal PHYSICAL challenges that are often a by-products of PTSD and combat trauma. This is why GETTING HELP EARLY is so important. Our hope in sharing our story is that veterans get the help they need sooner and avoid some of the long term effects that can occur.

Upon returning home, Joe initially experienced extreme GERD, although he did not know what it was. In the summer of 2009 he had his Gall Bladder removed. In March of 2010, Joe’s teeth began rapid and extreme decay. Totally, he has had 27 cavities and 11 root canals since returning home. Most of his “once perfect” teeth are gone or severely decaying. We currently believe this is a result of untreated GERD and poor dental hygiene and nutrition during much of his illness.

Joe is also scheduled to have extensive GI work-ups as well as sleep studies, to address problems we also believe are due to the war related illness he has experienced over the past 8 years.

While he struggles to meet the ongoing challenges of “war brought home”, he perseveres with great resolve, rising to meet each one with hope for his ongoing recovery and with the knowledge that sharing his experiences may help others. Our family continues to support and love him in his “long journey home”.

It will be 10 years in January that Joe left for pre-mobilization and then to Iraq for a total of 15 months.  The 19 year old that left has lived a life-time during this past decade.  While there is much that has changed for Joe, one thing that has remained the same is his “heart of service”.  In the midst of his suffering he has remained driven to “tell his story” so that others may get help sooner and also realize that they are not alone.  He is steadfast in this mission of service; as are so many of our military members and veterans.

The most recent change is a reduction of medications, and this he says, has allowed him to “feel” once again.  He has also said that he did not think he could have bared to “feel” the pain initially, but now he is ready.  He expresses that a great part of his wound was a moral and spiritual injury and that “feeling” again has not only has helped him to release much of the pain, but also to find out that there is still beauty in the world.  For this, he is thankful.  For this, he wishes to encourage others to move forward because in the midst of, and through the sorrow, there is great Hope.

One of the reasons that Joe continues to be an “inspiration”, is that despite his hopes and dreams that his life would be self-sufficient by now, it is not and yet he continues to “fight the good fight” and perservere.

Since the last update of 2012, all of Joe’s once-perfect natural teeth, have disintegrated and been replaced by the volunteer efforts of Oklahoma Dentists through D-Dent (a local non-profit).  He is able to smile again.  The process took 3 years of constant dental visits, root canals, and crowns, but it is complete thanks primarily to Dr. J. Don Harris and Shirley Harris (whose late son, Sgt Brandon Harris served in OIF in 03).

Joe has also been diagnosed with a Sleep Disorder.  To quote Joe, “when you are in a combat zone it is hard to sleep.  All you do is long to return home so that you can sleep. Then, when you come home, you don’t want to sleep because to sleep brings the nightmares”.  10 years of sleep deprivation has clinically impacted Joe’s sleep cycle and now he has a breathing machine, meant to regulate his sleep cycle.  This has required extensive testing and doctor visits and while he is feeling refreshed in the morning, the nightmares have returned.

We have become accustomed to endless doctor visits (9 years now), but sometimes not prepared for some of the responses we receive.  Joe relates it this way.  “Families see the raw footage of the wounds of war 24/7/365.  Medical professionals see a snapshot. Often we feel caught in the middle”.

Each experience teaches us something new about ourselves as individuals, as a family and as community.  Some of the lessons are painful.  Some, are full of such tender kindness that Hope is nurtured.  We constantly search for ways to support Joe to the self-sufficiency that he longs for and has worked hard to accomplish.  And as research is telling us, it is often a long and difficult journey both for the wounded warrior and their families who love them.

Our continued hope is that people will seek help early, continue to educate themselves about the “ripple effect” of the wounds of war, recognize that the systems that were developed to help veterans and families are overwhelmingly complex and do not meet the needs of all wounded, and that we are all in this together.

Most importantly, we hope that Americans acknowledge that less than 1% of our population has served since 9-11 and that there is a weariness that comes from so few, serving so many, and with so many needs that are unattended…this is an opportunity for us all to open our hearts to change.